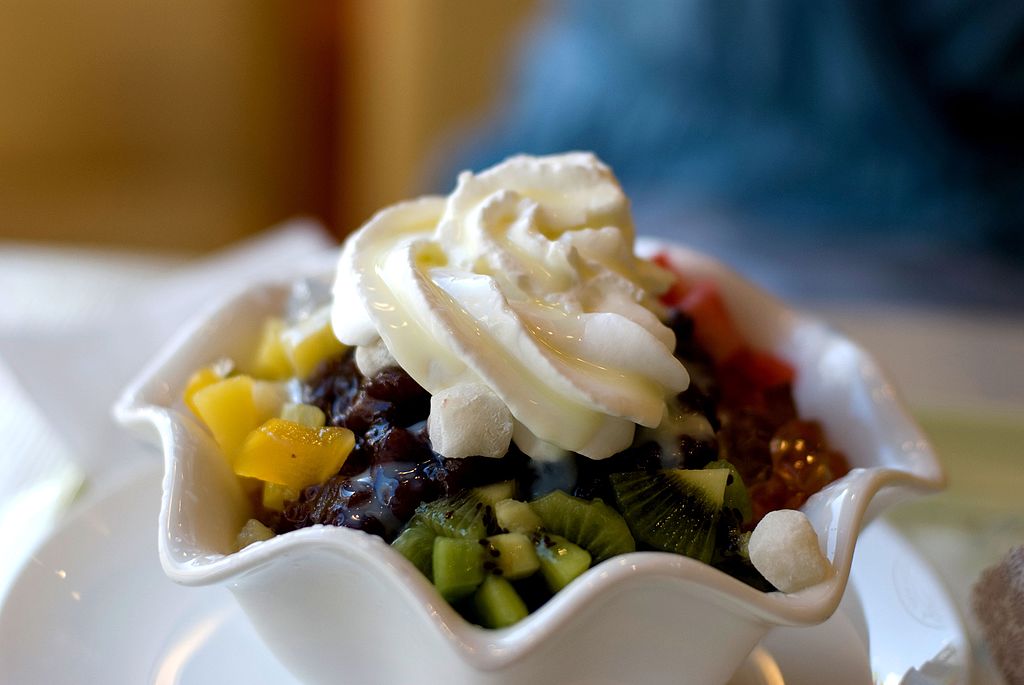 South Korea has its own culture of ‘fight the heat with the heat’. That’s why Korean usually eat their famous chicken soup known as samgyetang during summer time. However, sometimes summer is too hot to eat stew and soup boiled in hot water. For this reason, foreign tourists are strolling around to find something cold to ward off the heat trapped in the middle of summer. I strongly recommend for these people to try Patbingsu, adzuki-bean ice dessert.

Have you heard of it before? If not, it is the perfect time to try it as summer starts now. Are you the person always craving for something sweet? Do you prefer to drink iced Americano with a little bit of sweetness? Then you are going to fall in love with Patbingsu by the time you finish reading this article.

Koreans’ love for Patbingsu is beyond all imagination. When visiting the famous Patbingsu shops, people should determine themselves to wait in line for a short or long time. Whenever you go to a renowned restaurant in South Korea, there is a line or queue everywhere, too.

Patbingsu began to become a popular dessert in South Korea in the 1970s. As the refrigerator became cheaper and distributed among ordinary people, Koreans utilized ice to create inventive desserts. Ice was precious in the past as it is hard to keep it in low and cold temperatures, so sweets using ice were eaten only by the upper class like nobles.

The form of Patbingsu was quite different between the past and present. At first, the name of dessert was not Patbingsu initially. The word “Pat” in the dessert means red beans. However, red beans, also known as adzuki-beans, was not used as it is now. The original name was just Bingsu, as it doesn’t contain red beans. It was ice flakes with syrup. Simply adding colored and flavored syrup to the ice powder was the beginning of this kind of dessert. As it was distributed at low prices, mainly in street shops, the food fashion evenly spread around the country from students to adults. Once created, Patbingsu became an instant favorite for the locals to cool off their summer days.

Red beans have been loved by Koreans throughout the four seasons. Red beans are known as a super food in Korea for your health and consumed in various ways. People ate it coldly with red bean and shaved ice in the summer season and ate it warmly as red bean porridge in winter. Some add it while cooking rice for their daily home-cooked meals, too. So, how do red beans work specifically for our bodies?

First, red beans rich in vitamin B1 help break down carbohydrates, increase digestion and absorption, and help reduce fatigue and improve physical balance. The saponin component contained in the skin of red beans has the effect of removing waste and swelling in the body by controlling blood cholesterol levels and diuretic action. Adzuki beans are well suited for people who have a lot of heat in their bodies and feel thirst quickly.

Moreover, red beans have a detoxifying effect, so it acts its role excellently for alcohol discharge in the body. Women with urinary incontinence may expect health improvement by drinking juice made from red beans.

However, overeating always aroused some kind of problems. If red beans are consumed excessively, saponin can dissolve red blood cells and cause hemolysis. Due to these reasons, symptoms such as diarrhea, indigestion, and abdominal pain may occur so that it is good to take only the right amount for heath.

Now Patbingsu has become a must-eat dessert in South Korea. And unlike the past, the appearance and the way of eating have changed. The most prominent feature that is different from history is the ice sherbet made of milk, not just ice. The existing shaved ice is made by grinding chunks of ice. But Bingsu, which is popular these days, uses frozen milk in a special machine and scrapes it finely like a snowflake.

Unlike traditional desserts that had no taste in the ice itself, the benefits of milk shaved ice are softer and sweeter than the existing one. It melts softly in the mouth and offers distinctive taste and texture. It is trendy among people who do not like red beans. As milk ices have slightly-sweet taste in it, it is not necessary to add red beans for adding sweet flavor more.

The menu and taste have also been diversified. Fresh fruits such as blueberry, strawberry, banana, mango, melon are cut and put on garnish with fruit extracts. People call it ‘Fruit Bingsu.’ These desserts have been hot trends among young generations. Regardless of age or gender, everyone loves it as it is good for health and can taste the sweetness naturally, not with the artificial sweeteners. If you are planning to spend a summer in South Korea, it is the dessert you should try.