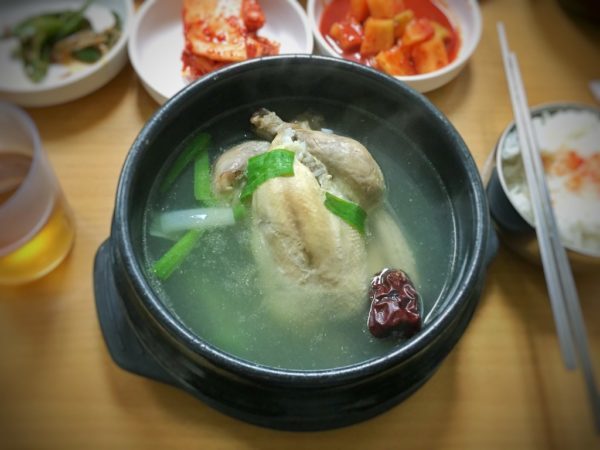 Samgyetang is a well known soup that is eaten as a meal typically on summer days. Samgyetang is a shortened word that translates to ginseng chicken soup. This soup is known to be healthy for immune systems and healing and includes ingredients such as red date, rice, garlic, and an entire young chicken which is how it is so filling.

Generally speaking, many Korean clear broth soups are served unsalted and so is samgyetang. In restaurants that offer samgyetang, you should be able to find a small container with grains of salt that you can add to the soup to your liking. Don’t worry if it seems like you are adding a lot of salt, this is normal as the samgyetang broth might be completely unseasoned. However, even without salt, you should be able to taste the strong flavors of ginseng and chicken. 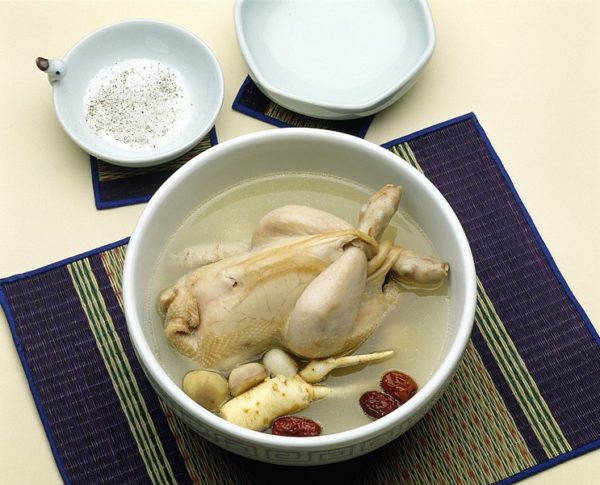 What is “Fight Heat with Heat?”

Fight fire with fire. Can you guess what it means? These words may sound a bit strange. Eating hot food on one of the hottest days makes little sense when it comes to common sense. If translated the words written by Koreans into English, it means “fight heat with heat.” Koreans have historically believed that the best way to deal with humid and hot temperatures of Korean summer is by expelling the heat inside of your body. After you sweat, you will feel a cool sensation of your body as your sweat evaporates. It may not be the most scientific method of cooling down your body, but this old wives’ tale have made its way into Korean culture. You will be surprised to see a decent number of vendors selling hot and spicy items during the hottest days of Korea, which usually lasts between late June to late August.

Chicken, the main ingredient of Samgyetang, is rich in protein and plays a crucial role in enhancing immunity. Because the immune cells in our body are made up of proteins, supplementing them is very important for health care during the summer season. If you eat only cold food frequently to cool down body temperatures in summer, Koreans believe that you are more likely to catch a cold.

Koreans often use root plants such as ginseng and garlic as a minor ingredient for Samgyetang. Ginseng contains a saponin component to increase our natural immunity system, and garlic has a special element called allicin to prevent external bacteria from invading our body. Korean believe allicin in garlic help our heart and body by getting rid of harmful cholesterol.

Both ingredients are good for our health. This is why old ancestors ate Samgyetang as a nutritional food to overcome the heat during the hot summer season. With this knowledge, we can realize that Korea’s traditions reflect their ancestors’ ideas and wisdom. Among Korean people, the cuisine of the old tradition is called “ancestors wisdom.”

Origin About “One of the Three Dog Days”

Along with the chicken, Koreans had a history of eating dog meat to combat the hot days. Fortunately, selling and eating dog meat has been banned by the government since then. However, the expression of “three dog days” remain firm in the culture to refer to the practice of eating hot food soup during summer.

Koreans have believed that consuming these foods would help them stay healthy during the summer season. This seems like a precautionary measure originated from traditional customs to prevent our body from a weakening of energy and falling by dangerously high temperatures. Historically, there are three days that signify the beginning, middle, and end of the hottest time of the year — Chobok, Joongbok, and Malbok in Korean. The concept of the Three Dog Days was introduced to Korea from China during the Qin dynasty (BCE 221 – BCE 206).

The ancestors ate Samgyetang to overcome the heat. Additionally, it was reported that they ate red bean porridge, watermelon, and melon for restoring the health of their body. These factors are already over a thousand years old, but historical culture continues to these days.

Samgyetang is often called “nutritionally complete food.” However, there are instances where you should not consume this delicious soup. Chicken and ginseng are classified as foods with warm properties or yang foods from oriental medicine. Yin foods are said to cool the body while yang foods heat it up. People with high fever must have to soften the heat in their bodies by adding cold ingredients.

Be careful as too much salt is contained in the Samgyetang broth. Despite only one meal a day, it exceeds the average daily recommended amount of sodium. Eating with salty foods such as kimchi can be harmful to your health through excessive sodium intake. Therefore, it is recommended to eat it mainly with ingredients rather than soup.

There is one wrong myth, as well. That is, eating jujube in Samgyetang is harmful to your body. Even many Koreans believe that jujube should not be eaten because it sucks poison from Samgyetang ingredients while cooking and boiling. But this is wrong and mistaken knowledge.

It is true that jujube absorbs moisture and nutrients in the cooking process. Samgyetang contains only good ingredients for the body, so you don’t have to worry about it and throw it away. If you have a chance to see that someone reluctant to eat jujube due to this reason, give them advice with this explanation and say, “it’s okay to eat” proudly.

How to Cook Samgyetang

Samgyetang can be found in many restaurants in South Korea and some restaurants even specialize in making samgyetang only! If you are not visiting South Korea soon and would like to try making this dish, we have a recipe below that serves 2. That means you get to eat a whole chicken by yourself!