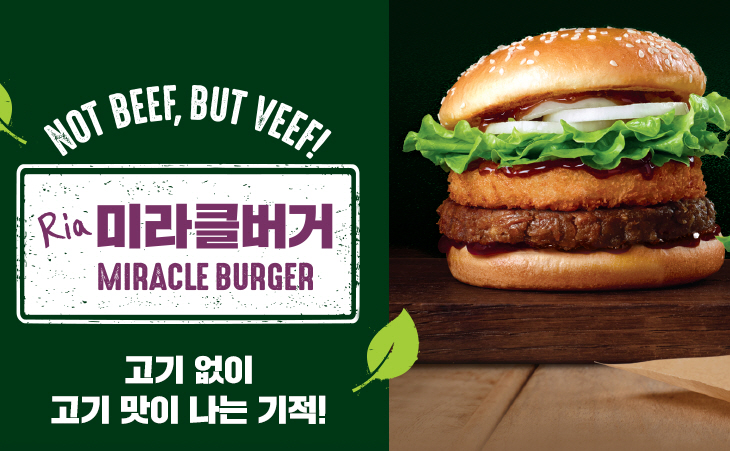 Ask any vegan or vegetarian who has ever visited Korea and they will tell you that dining out is a pain, like, a searing pain in the forehead because people completely ignore you when you ask for a vegetarian option. If you don’t have a vegan or a vegetarian friend to tell you, then that’s what we’re here for, and to tell you that slowly but surely South Korea is getting better at accommodating for vegans and veggies. Enter Lotteria’s “Miracle Burger” advertised to be a big deal and I suppose given how limited options are, it is. So what exactly is it?

The Miracle of Veef not Beef

With the growing trend being in “ethical consumption”, Lotteria sought to capitalize on this and create the Miracle Burger, a patty made from wheat and beans, the bun made from soy instead of egg and Korean barbeque sauce and onions and plant based replacements for the milk in the bun. This burger has taken off in Korea, showing there is a real market for ethical food and therefore vegan and vegetarian friendly foods. So this could be the beginning of a new, more inclusive wave for young Koreans looking to make an ethical change to their lifestyle, or to expatriates who made that decision long ago, not to mention the tourism industry. This could really be a massive deal for Korea as a nation.

The Conspiracies Run Wild and Free

While there are those who wish to praise Lotteria for creating such a burger, there are also those who will remain skeptical, and for that reason, partnered with South Korea’s online presence. The allegations that this Miracle Burger is in fact not vegan friendly started to fly around. Die-hard vegans claimed that this was simply vegetarian Friendly and not vegan friendly. In fact, after these allegations were made, Lotteria started testing certain branches and found that there were trace amounts of animal product in the Veef, while some of the buns being used had egg and milk in them, making them unsuitable for vegans or vegetarians in some instances. Because of this, Lotte (parent company of Lotteria) has not even attempted to get certified as a vegan burger, admitting that these burgers are made in the same assembly line as the regular beef burgers. So the only real audience for this burger is people looking for something other than beef for a personal change not an ethical one, or what is coming to be known a “Flexatarians” people who will eat animal product if they have to, but would rather not.

To summarize, this could still be the key step in moving forward with ethical food practices in Korea and creating a much more accepting and inviting world for vegans and vegetarians, but for right now, there still isn’t much in the way of choice, and the only mass marketed choice, is a roll of the dice as to whether or not it aligns with your ethics and views.