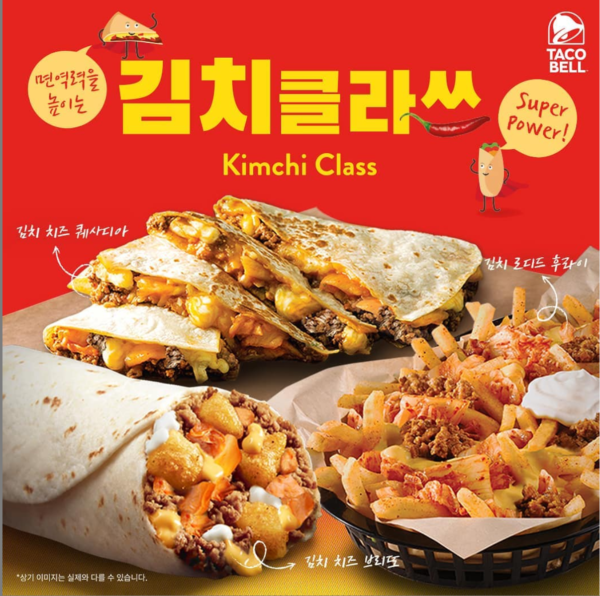 The Kimchi inclusive menu at Taco Bell in Korea

In Korea, nowhere has it made more of a splash than at Taco Bell where the Kimchi Quesadilla, which according to sources, made up 10% of sales in the whole country. So, what is all the fuss about?

The Quesadilla – and its meteoric rise to fame

If you venture to the address 11 Gukjegeumyung-ro 2-gil, Yeoeuido-dong, Yeongdeungpo-gu, on the west side of Seoul just across the Han river, you will find one of the busiest Taco bell restaurants in the country. As mentioned before, localizing menus isn’t special, however, this particular dish became wildly popular amongst Koreans and foreigners alike. So what is it? It’s not that different from a regular quesadilla with friend chicken in spicy sauce and lots of gooey cheese. However, that is what helps balance out the kimchi. For those who have yet to try kimchi, here’s a vague idea as to what the Korean delicacy is; cabbage coated in fish oils, garlic and other various herbs and spices, fermented in giant pots in the ground. The duration in which it is fermented determines the flavor and strength of the kimchi. Because of this process, kimchi is salty, acidic, and very spicy, meaning it balances out the cheese and the saucy chicken beautifully. However, this fame and success doesn’t mean it will be heading state side anytime soon so for one to try this dish, you’re going to have to jump on a plane.

With the localization of Taco Bell, Kimchi didn’t just stay in their quesadillas. In fact, it made its way into just about everything, from their burritos of various meats and vegetable offerings, to the stacked tacos both hard and soft shell and again with various meats and vegetable options. Taco Bell serves a lot of different meals and dishes with kimchi homologated in them, and due to the nature of Mexican food (fried meat and melting cheese) Kimchi blends in perfectly. This is what helps keep Taco Bell alive and well in South Korea with the other dishes receiving mostly positive reviews. Don’t take our word for it though, next time you see a Taco Bell in South Korea, pop inside and try it out for yourself. You just might have a new favorite fast-food joint.