There are many methods of preserving foods and they vary all over the world. We’d like to think that the Korean dish kimchi knocks the socks off the competition when it comes to an exciting dish that is also very good for you. The Germans have a similar dish called sauerkraut which consists of roughly shredded cabbage that is preserved in a fermenting process. While sauerkraut is a fine dish in itself, if you were to sit down at a table with a plate of sauerkraut and kimchi, we’re willing to bet that you would be drawn to the kimchi immediately. What differentiates kimchi from other preserved foods is the way it’s made as well as the ingredients.

There are rumors that there are over a thousand different recipes for kimchi in Korea and this is likely because Koreans hold kimchi to be very personal. Families pass their recipes from generation to generation sometimes as a well-kept secret. With that kind of variation, you cannot expect it to taste the same anywhere you order kimchi. Generally speaking, kimchi has  a strong taste but it’s important to remember that just because it’s not your favorite the first time you try kimchi, it’s best to give it a few more tries as another variation might fit your taste buds better.

How is Kimchi Made? 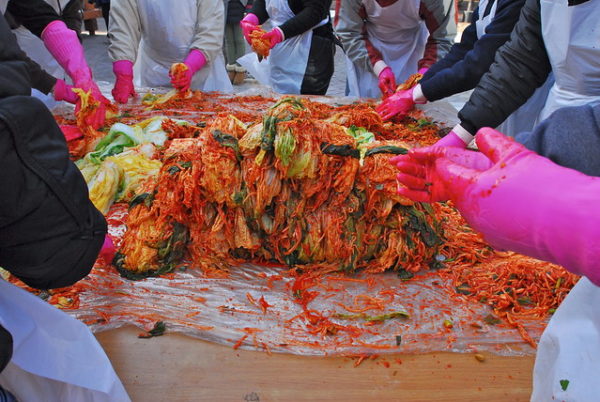 Kimchi is made by shredding cabbage or cutting it into large strips. Then you add in some garlic, ginger, and chili pepper flakes. You can see how it would leave it’s blander cousin sauerkraut well behind in the taste race. Some people also add shredded carrots during the packing process as well.l. This also adds some color to the dish as well as helps to bring more flavors to the surface. Some recipes also call for beetroot, shallots, and fish sauce. It’s really one of those dishes that welcomes personal expression.

After adding some salt water and a little pepper to season, it’s time to store it away to allow the magic to happen. Traditionally, kimchi is stored in clay Kilner jars that are buried in the ground to allow the fermenting process to proceed at a slow pace. The cool underground where the jar is kept is like a natural refrigerator. The kimchi will take about a month to ferment although it will last a lot longer if necessary. This method of packing the raw ingredients in a giant clay jar and then burying it deep into the ground was the original way Koreans made kimchi before electricity was discovered. Nowadays, it’s common for Korean families to have dedicated kimchi fridges to make and store large quantities of the fermented side dish.

In more recent times, doctors have started to realize the health benefits of eating kimchi although Koreans have been shouting about it from the rooftops for generations. There are some impressive health benefits claimed from eating fermented foods. While it’s always good to approach these with a healthy skepticism, there does seem to be some science behind much of it. 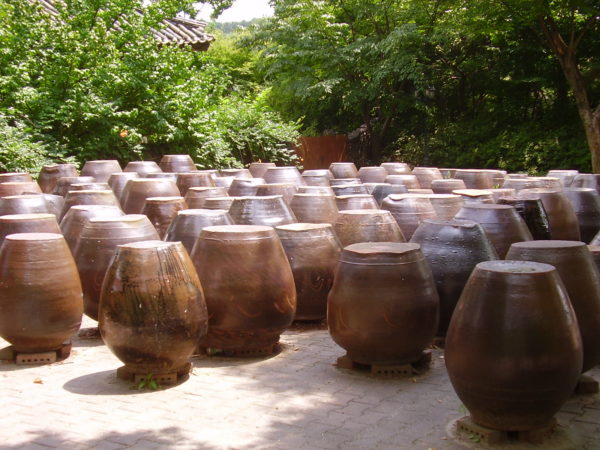 The health benefits claimed for kimchi relates to gut health mainly and the beneficial effect on the good bacteria that all of us need in our gut. Fermented foods are thought to improve our bodies’ ability to pre-digest food particles which makes it a lot easier for our gut to actually absorb the nutrients. In addition to improving the health of our intestinal tract, fermented foods are also thought to help boost our immune system. We all carry about two kilos of microbes in our gut and they are made up of over a thousand different species. Microbes outnumber our cells by a ratio of ten to one so it’s important to keep the good bacteria growing.

In a world where we are constantly exposed to highly processed foods, kimchi is like a refreshing dose of nature. It’s great for boosting that good bacteria in our digestive system which is linked to reducing the effects of depression. Scientists are now looking at the microbiome as a complete organ in its own right.

If you feel Korea calling you and you would like to sample some of that wonderful Korean culture, kimchi is the quickest way to do that. There is perhaps no other food that is more quintessentially Korean than kimchi. Even when you visit restaurants seemingly unrelated to Korean food while in Korea, you can find a small dish of kimchi as a side to enjoy with your main meal.