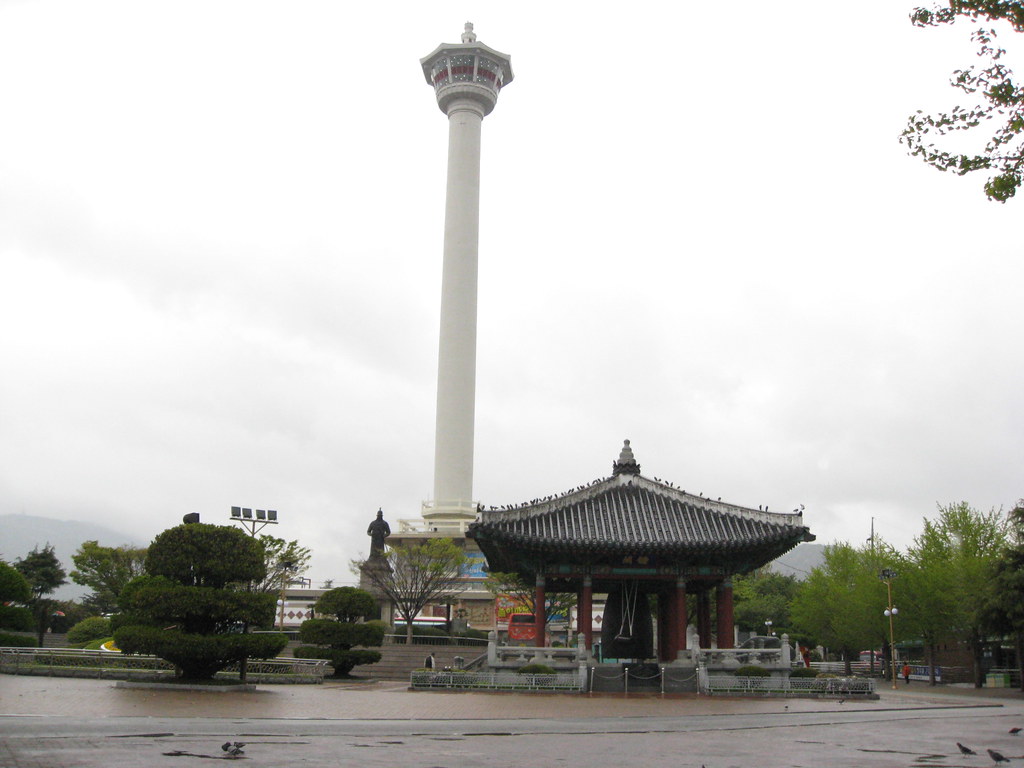 South Korea has an abundance of exciting and beautiful places to explore. From Seoul to Busan, there is a little bit of something for everyone. Seoul may have its famous Namsan Tower, but Busan has a tower of its own to match. One of the must-see places is the Busan Tower which paints the skyline in Yongdusan Park in Jung-gu Busan, South Korea.

History of the Busan Tower

Erected in 1973, the tower is considered, as with many other structures, to be a strong symbol of Busan. The city of Busan is proud to be represented by such natural beauties and magnificent building structures. The architecture of the building, particular the top, is said to be modeled after the baldaquin (ceremonial canopy) of Dabotap Pagoda, which is in Bulguksa Temple, in South Korea.

The park in which the building sits in dates back to the Korean War. The tower was constructed as a means to represent the city. The park was a pinnacle location for such building to be home for. Residents and tourists alike find this attraction a stunning place to visit.

This monument to the great city of Busan stands at an astonishing 226 feet above sea level. Even more impressively, it overlooks the city at a staggering 393 feet (or 120 meters). With these grand heights, guests can see everything from the top, which is an observatory deck. To gain access to the tip-top of the structure, there are two high-speed elevators that transport guests up. It only takes 45 seconds to ascend to the top! The high-speed elevators are innovative and firmly stand with South Korea’s rise in technological advances.

Unlike other towers, there is no other purpose to this attraction other than a leisure activity. It was built for the view, which is said to be best during the autumn months as all the changing colors can be seen from the deck. The upper deck also has a small cafe that serves small refreshments. The observatory is truly a special place as it offers up the only 360-degree skyline view of Busan. 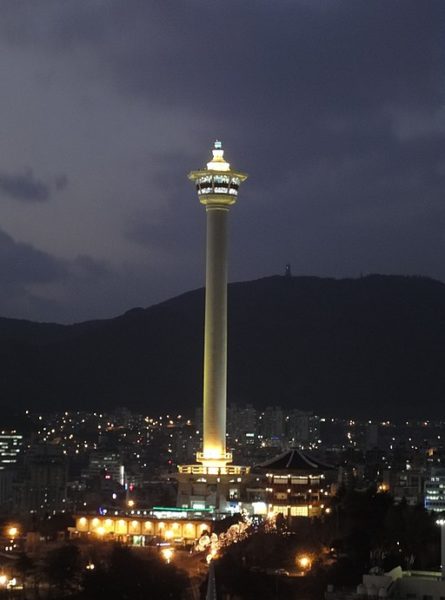 While autumn is a perfect time to see the weather change into bright oranges and reds, the other notable time to visit the deck is at night. The panoramic view of Busan from the deck is breathtaking. The lights from the city bring an ambiance that only can be appreciated from 393 feet in the air.

Things to Do near the Busan Tower

While the tower itself is a stop on everyone’s list, there are small quirky things to view on the way there. The tower is flanked on either side and in the front by various interesting things that are a part of the Yongdusan Park.

Guests can see an impressive flower clock, which is well-maintained shrubs and colorful flowers, shaped into a clock. It sits directly in front of the tower, This display is incredibly popular to look at. 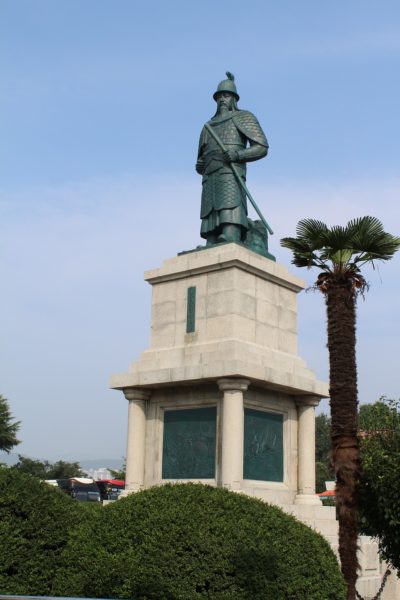 Nearby the tower is also a statue of the Great General, Yi Sun Sin, who has a substantial historical impact on the South Korean culture. This statue is considered one of the greatest landmarks in South Korea, with the tower being on the top of the list as well. The statue was built in 1968 and has had a little more among the Yongdusan Park than the tower has. There is an artfully skilled dragon statue stationed among the tower’s surroundings.

Also near the tower is a display of the Korean Traditional Bell. It is housed in a platform with classic Korean architecture surrounding it. It has a long history in South Korea. It is the largest of its nature and is dubbed with the name, “Bell of King Seongdeok,” by King Gyeondeok, to honor his father. The completion of the bell never saw the eyes of King Seongdeok, as he passed away before its construction was finished. It is still considered an honorable bell and its display has brought many from afar and close by to see its rich bronze surface. 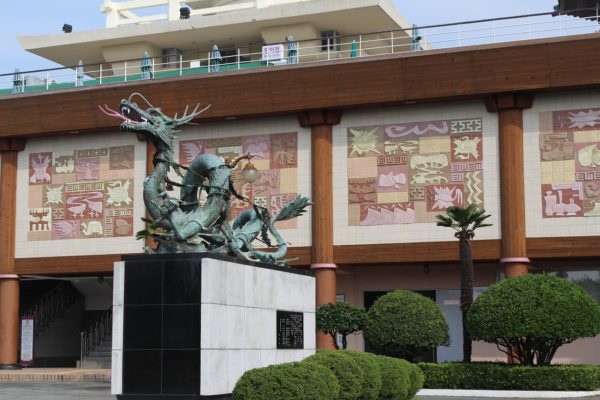 The Yongdusan Park, which surrounds the tower, is home to the World Folk Instruments Museum. Among all the places to visit while exploring the Busan Tower, this is probably the best next to the tower. This musical museum is a time capsule that takes guests on a journey through the musical instruments of Korea throughout history. Some of these instruments are so old, they are considered extinct objects. The museum preserves these astonishing works of art. They also host some of the instruments being played in a melodic masterpiece that one can only truly appreciate if they are there.

The park also has a “love lock fence,” which has been a popular trend. People write love poems and love notes to significant others, admirers, and family members and lock them to the fence using a padlock. This display is a gorgeous view of a metal heart in the fence and the many colors of the things locked to the fence. It shows permanent standing with people’s emotions. It is a quirky spot to check out while exploring the tower and the things around it.

One of the other spots guests must visit while seeing the tower is the artificial waterfall. Even though it is man-made, it is beautiful nonetheless. This particular rock formation provides an outlet for the small and steady streams of water. They empty into a small area at the foot of the waterfall.

Hours of Operation and Pricing

Visiting Busan will bring lots of fun and engaging spots to check out, but the Busan Tower and its surrounding attractions should be at the top of the list. The views of the Busan and beyond are out of this world and truly a once in a lifetime experience!

Getting to the top of the tower is obviously the main attraction, but the inside has been designed to give guests a unique experience on the bottom as well.

When entering the tower, there is an electronic display screen that people can tag their photos from their visit. It is possible to see the tagged photo displayed right on the digital wall. Also on the main floor, keeping with the digital content, are panoramic photographs in a special room dubbed the “Projection Room.”

Probably one of the most favored attractions in the tower (next to the observatory deck of course) is the quirky art display, “Black Wonderland.” This art display has black painted walls and fluorescent brightly colored paints that are only visible with a black light bulb.

The tower also has small snack bars and popcorn for refreshments.

How to get to Busan Tower

The easiest way to get to Busan Tower and Yongdusan Park is through Nampo Subway Station, take exit 7. From there, guests should head Gwangbok-ro Street for about 350m, approximately a 5-minute walk. Then there will be an escalator for Yongdusan Park that guests can ride up to the area. From there, guests will see the rising tower and park entrance.

All the tower exploration will make any guest ready for a bite to eat. There are a few options near the tower for tasty food. Below are some popular options.

Not far from the tower is this little restaurant. They specialize in chicken soups and chicken dishes like skewers with veggies. Their flavorful soups are made with ginseng and other various ingredients that really brings a creative taste to their guests.

This niche restaurant promises its guests food made with unprocessed natural ingredients. This follows a popular trend in Korea, known as “Korea Table d’hote” or “Han-jeongsik.” They have a small menu but are most known for the natural foods and their hot pot rice dishes.

With a long history of serving delicious dishes to its guests, the Seoul Kakdugi is a place worth trying. They are most famous for their ox bone soup and kkakdugi (kimchi made with radishes). They also have a variety of beef bone soups as well.

This trendy spot is known for its soft tofu stews. They also have short ribs and green onion pancakes, a popular Korean street food. With their simple yet elegant interior, they are inviting and offer up tasty, traditional Korean favorites.

Since 1982, this classic spot has been bringing delicious food to its guests for the most wallet-friendly price around. They believe in great food at small prices, a tradition they still carry on today. They are known for their soft tofu stews and kimchi pairings but also serve other foods. They also serve soybean paste stew, pickled seafoods, and octopus.