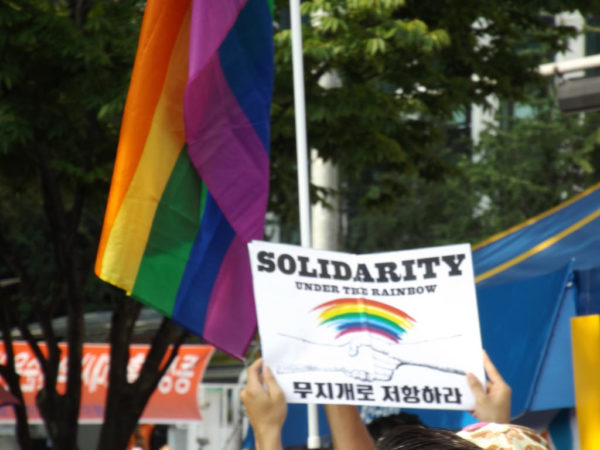 The state of LGBTQ equality in South Korea has lots to be said for it under the rule of a predominantly conservative government. Lesbian, gay, bisexual, transgender, and queer people in Korea do not exactly have any laws imposed against them, but the nation has yet to embrace people who are a part of this community.  Constitutional recognition and cultural acceptance have a long way to go.  The South Korean Constitution or the Civil Penal Code does not mention homosexuality, but it does state in Article 31 that no individual is to be subjected to discrimination on the basis of their sexual orientation. This permits male and female same-sex sexual activity but does not actually provide them with provision for same-sex marriages or any form of legal partnership.

While transgender or transexual people in Seoul are permitted to undergo sex reassignment surgery after the age of 20, the general awareness about the LGBTQ community still remains relatively low. Being gay, lesbian, bisexual, or queer is still considered culturally taboo and this means a lot of people have yet to come out.

With a conservative society that frowns upon same-sex relationships, it is unlikely that sudden radical change will happen soon. Proper awareness and rallying for rights by the LGBTQ community has the potential to gradually change mindsets and improve legal conditions for individuals that identify with the community. It is sometimes the case that gays, lesbians, and bisexuals who have come of the closet have been suggested to go conversion therapy to cure their so-called problem.  However, certain sections of Seoul seem to be opening up towards the feelings of acceptance. Itaewon and Hongdae are some neighborhoods in Seoul that have gay and LBGTQ+-friendly clubs. In 2018, the Seoul Plaza was witness to tens of thousands of people who came together to celebrate the Seoul Queer Culture Festival. South Koreans generally have a calm, kind demeanor and can really be friendly and welcoming. With time, acceptance is not far away.

An encouraging improvement and an opportunity for many LGBTQ people to hop out of the closet might be the upcoming Pride Parade 2019. The festival that will advocate for legal equality among sexual minorities is expected to run for two weeks in Seoul starting in end of May. The 20th Annual Queer Festival is championing a slogan of “The 20th Fight for Rights”, and will include a pride parade, film festivals, and lectures.

The head of the Seoul Queer Culture Festival Organizing Committee, Kang Myung-jin has called upon the government and police to be more receptive of the festival and safeguard the participating individuals from any harm. The actual dates of the event have been kept strictly confidential to ward off any probable disruptions from anti-gay activists.

This year’s festival is also expected to have a Pink Dot event that encourages attendees to wear pink clothing and accessories to express solidarity with the LGBTQ community. The event will also depict pink lights shone in the sky by all attendees.

All in all, the rallying attempts by the LGBTQ community and supportive efforts by the general public might actually turn the negative perception around and create a major impact on the government’s standing on this community’s status quo. With that in mind, there must be hope that the government will soon guarantee universal rights to same-sex/transgender communities.