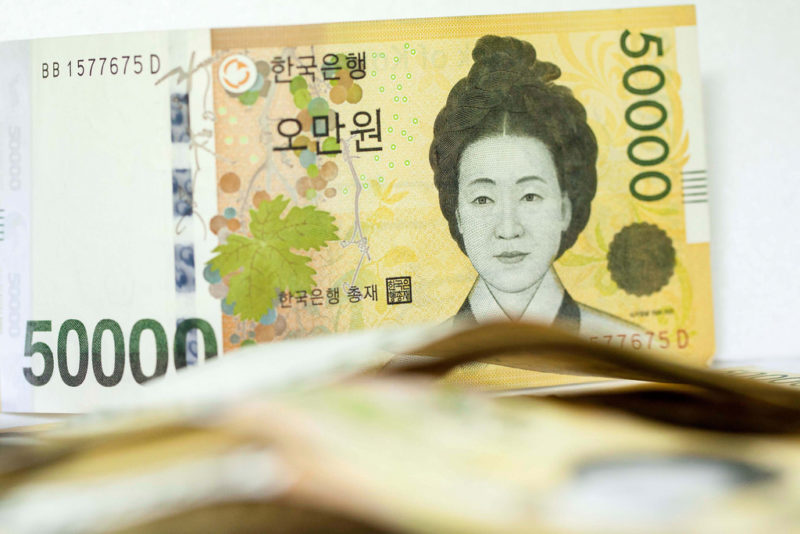 It’s important to get cash before you travel to Korea because many places may not take credit cards. Areas with street vendors or traditional markets probably won’t have credit card scanners to process payment. Also, if you didn’t notify your credit card company that you’ll be travelling, they may freeze your card activity until you can confirm it hasn’t been stolen.

Korean money, similar to a lot of other countries, are color coded by denomination. The exchange rate compared to U.S. dollars is about 1000 Won to 1 Dollar in recent times. The easiest way to calculate prices while spending money in Korea is by dropping two zeroes or imagining a decimal in front of the last two digits of a listed price.

Touristy areas in large cities will have currency exchange vendors with large neon light signs that show different country money signs. However, their rates will likely be worse than what you can get if you exchange money before you depart for your trip. Money Order Through Your Bank

Most major banks will offer services where you can order a set amount of foreign currency that is converted from money in your account. It is then sent to a bank branch near you for your pickup. Banks set an exchange rate that is favorable to them so they make some money on the order but it will be one of the better rates available.

Some credit cards meant for frequent travelers let you use the card and roam with no fees associated. Typically, credit card companies charge a 2-3% processing fee to convert your home currency to the foreign one but specific travel cards will not. It’s worth spending some time to research which cards are available before you make a trip! However, it’s common that these specialized cards have some sort of annual fee.

If you’ve arrived in Korea and are in desperate need of cash, you can exchange other currency at the airport. Every major international airport should have offices to exchange money and the rates will be displayed from their windows. Most likely, the exchange rate is not going to be very good which means you’re getting a lot less back than what you put in. This is definitely the last resort and you can always exchange a bit of cash now and seek out better venues to exchange more later!