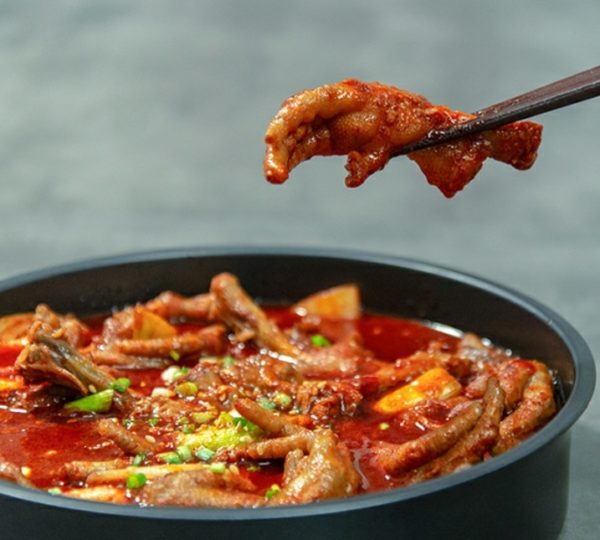 Have you ever noticed how different every eating cultures around the globe are from your national cuisine? No, I am not talking about globally known traditional foods of various countries. Every country has hundreds, or even thousands of dishes that are yet to be introduced to the rest of the world. You’ll be surprised how little you actually knew!

In this new series; unique eats of Korea”, we’ll explore finger-linking, never-heard-of, and maybe even a little ‘odd’ Korean foods that even locals either love or hate and makes you want to ‘conquer’.

What in the world is this chicken feet dish?

Which part if your first choice when you eat chicken? The breast meat for a daily protein intake? Drumsticks for the juicy meat? But how about the feet?

You might make a face and go “ew, why would you eat a foot”. There are people who are against the idea in Korea as well, it’s not every body’s cup of tea. However, if you can eat chicken feet and like eating it, there is not a better night time food or Soju food than this.

How is it served and cooked?

닭발 (chicken feet, pronounced dakbal) is served and cooked in various ways. There is two ways of serving it, de-boned and not boned. Chicken feet contain lots of little pieces of bones (and even the nails sometimes). So restaurants often ask the customers whether they want theirs with or without the bones. Actually, some people even believe eating chicken feet with the bones de-boning by yourself as you go is the only and real way to eat this delicacy. Hence the little stainless buckets on the tables in the chicken feet restaurants, for all the bones you will have to ‘spit out’.

There are unlimited ways of how to cook chicken feet, but the most common way is boiling then stir-frying in a really spicy sauce. In fact, when you say “닭발 (dakbal)”, it always means “a boiled and stir fried spicy chicken feet dish” unless you specify. This particular way of cooking chicken feet is so common, it replaced the meaning of the name for the ingredient itself!

What are the new trends in 닭발 world?

Other than stir frying chicken feet in a really spicy but delicious sauce, there are new menus that are gaining fans really quickly. Koreans have a culture where they need to have a stew, soup or broth type dish for every meal, although it’s not a rule, it certainly is how they prefer. With this culture built in every Koreans brains, this “stew type spicy chicken feet” has been created which has become a very popular dish.

Chicken feet contains a good quantity of collagen. Due to this fact, it tends to harden whatever liquid you cooked it in just like jello. Using this ability, this dish called “닭발 편육” (dakbal pyeon yuk) has recently been created. To make 편육 (pyeon yuk) you first boiled the meat that contains collagen for a long time, then press it in a square pan until it cools down and hardens completely. You can see beautiful almost like a marble pattern on its slices, and certainly is a delicacy for chewy food lovers.