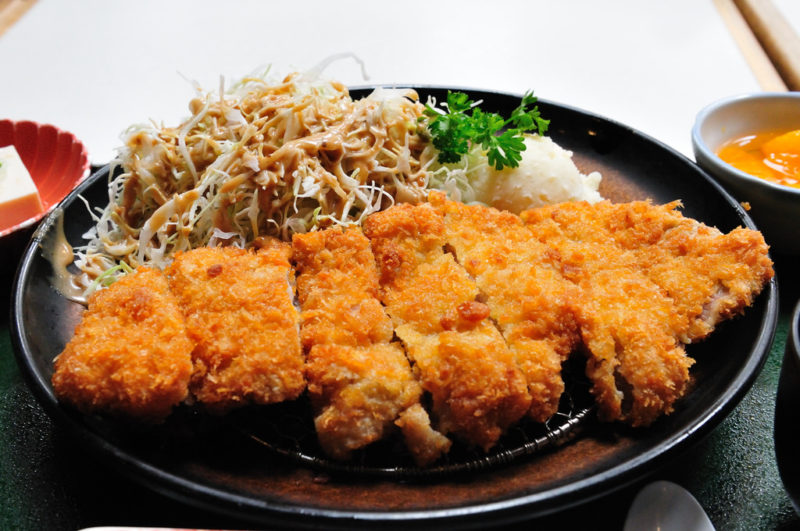 Donkatsu (돈까스), commonly also spelled as tonkatsu, don-gaseu, or don-kkaseu, is a breaded pork cutlet deep fried in vegetable oil. The dish in Japanese roughly translates to “pork fry.” While the dish originated from Japan, the dish crossed the sea to Korea during the Japanese occupation in the early 1900s. Since then, Koreans have adopted and put their own twist on the dish.

While the Japanese version thicker and smaller, the Korean donkatsu thinner and bigger achieving a bigger surface area to be breaded and deep fried. This is possible since the pork cutlet is pounded similar to Austrian schnitzel. Having a larger surface area also allows the dish to be absorb more sauce and be more flavorful. The sauce is typically sweet, but Koreans have developed a spicier version to satisfy their propensity for spicy food. The dish is typically accompanied with rice, kimchi, a light salad, and pickled yellow radish. Donkatsu has risen to popularity among the Korean population in the 1960s. The dish is considered a people’s food where everyone can afford to eat this delicious food while filling their belly! The dish can be commonly found at highway rest area restaurants and cafeterias. In addition, there are specialized restaurants that serve various combinations on donkatsu using different meats (e.g., chicken, fish) and sauces. How to Make Donkatsu?

You can always enjoy the dish with a heaping bowl or rice or a salad on the side.